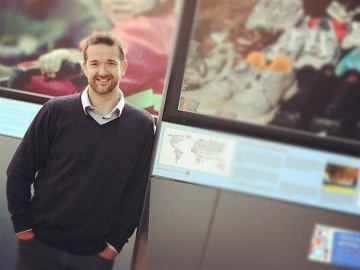 We were delighted to interview Dan Sutch, director at CAST about their recently published digital design principles.

At CAST we run a number of hands-on programmes that guide charities through researching, designing and testing new digital services. Good digital service delivery is hard and the methodologies needed to achieve it, such as agile or user-centred design, are still quite new to our sector. We’ve worked with over 300 brilliant organisations in the last 3 years but with over 165,000 charities in the UK, we wanted to understand what could be done to support sector change at scale.

One thing that came up repeatedly in our work with charities and funders was the importance of having agreed principles on how to ‘build the right thing in the right way’. We’re big fans of reusing what works, so we decided to do some research to explore if and how principles could be useful to others in the sector.

Starting in February, we held 1:1 interviews and workshops with over 50 charities and funders of all sizes. We found many of the most digitally-mature organisations were already using design principles to support their work, such as those from the Government Digital Service or the Principles for Digital Development created by international development organisations. But there wasn’t a single set that quite fitted the needs, language and context of UK charities, which meant people ended up picking and choosing from different sets or writing their own. This was problematic because it created a lot of duplicated effort, and without a single standard for what ‘good’ looked like in the sector, people who were new to digital development didn’t know which ones to choose or where to start.

Our research also found that creating a list alone wasn’t enough; principles became most useful and used when they were shared through people – socialised through personal relationships and stories. People wanted tangible examples from other nonprofits, and tools that would help put them into practice. This needed to be reflected in whatever was produced.

So we brought together charities and grant-givers to co-create a set of design principles, by and for the UK social sector, building on the great work that was already out there. Alongside the principles themselves we crowdsourced stories of how charities had implemented them in their work and any tools they’d found useful.

Through facilitating workshops where we ran exercises like card sorting, needs-mapping and creating job stories, we identified a long-list of suitable principles. These were whittled down further in another workshop, where we asked attendees to annotate the principles on the long-list, combining those they thought were similar, discarding any that weren’t relevant and ranking them in order of importance, with comments explaining their thought process. After some serious number-crunching and analysis, we were left with a list of 10 top principles that could be launched as version 1, and created a new independent website to house them: BetterDigital.Services.

At one of our workshops there was an interesting discussion around how to present the information in the most useful way. This led us to experiment with creating different scenarios, so people can access the information that’s relevant to them depending on exactly what they’re trying to do. These have proved popular, particularly ‘I’m building a digital project or service and want to make sure I want to make sure I’m doing it right’, ‘I’m about to start building a new product or service’ and ‘I want to get colleagues to work in this way’.

This will be different depending on an organisation’s specific needs and context. For example, our research found that for charities just starting out, design principles were a useful checklist to make sure a digital project was on track, while for more digitally mature organisations, they were a useful communication tool to help key stakeholders (including trustees) understand how digital services should be run. For funders, they provide useful guidance on what to look for when assessing applications, as well as being a way to support grantees’ digital development.

The site has been developed with these behaviours in mind – with checklists, print-outs and simple, non-jargony language that makes complex ideas easier to communicate. It seems to be working so far; we’ve had feedback from several charities that they’ve printed out the list and stuck it on the wall of their digital or services team, which is brilliant. Within the first week we had a charity report they’d used the principles to help them put together a bid, and a funder say they’d used them to help assess a bid.

Perhaps my favourite example though is a charity we’re working with that has gone one step further. They held an internal team workshop around the principles, using them as the starting point to help shape the organisation’s innovation strategy. They came out of the session with a bespoke set of principles which emphasise the things that are most important to them and the way they work. Most excitingly, with input from a wide range of staff from several teams, this is far more likely to get buy-in from people right across the organisation.

We and the organisations that helped create the principles are already using them in our work. We’d love to hear how others have found them useful, and if there’s anything they would change or add – people can send their comments to principles@wearecast.org.uk. This is just the first version and we’re planning to incorporate feedback into the next iteration in a couple of months’ time.

I think they would have to be…

This one is the most important. Good practice digital design and development places everyday users at the heart of new services that matter to them. It starts with defining the problem users face and developing solutions that will align with their needs, behaviours and expectations. We all have a lot of assumptions about what those needs are, so it’s really important to validate (or disprove) these through user research. Just spending 30 minutes with five different users – talking to them, observing how they behave and separating out their underlying needs from what they tell you they want – can be the difference between creating a beautiful but useless product and one that delivers real value.

But it doesn’t stop there. As your digital service evolves, you need to keep testing it with the people it’s intended for to see how they respond to it, and whether it continues to solve their problem. The beauty of this practice isn’t just that it helps charities create really great digital services, but also helps them build a deeper understanding of the changing needs and context of the communities they’re trying to help.

To save money and avoid reinventing the wheel, make sure you look at what’s out there already before you build anything. This will give you a sense of who’s working on the same problem as you, how they tackled it and how successful/unsuccessful it was. You should also see if there is any existing tech you can use rather than building from scratch. We’ve used drag-and-drop website builders like Squarespace and Tilda, and freely available tools such as Typeform (for capturing information from people or guiding them to the right information on your site) and Airtable (which can be used as a user-friendly CMS or CRM) to create proof-of-concepts, and even live services.

You can find lots of great tools through the Charity Catalogue, and a step by step guide to identify which one is right for the job at Alidade.

Many charities we talk to are so afraid of failing with digital that they don’t start at all. But the thing to remember is that no-one gets it right the first time – that’s normal and it’s OK. This process is about learning the best way to solve our users’ problem through creating the smallest, cheapest thing we can test. If you take small steps and break big complex challenges into their constituent parts, it’s much more manageable, less scary and helps you manage risk as you go along. It’s also much easier to get approval from your Board for a short two-week cycle of work that only requires minimal resource, and perhaps no monetary cost at all.

The key to making sure you learn from these cycles is to be disciplined about what the goal of each iteration is – what assumption are you testing and how will you know if it’s been proved or disproved? We’re currently working on a new tool to help charities navigate this process more easily – you can sign up to become one of our early testers. And in the meantime you might want to create a system to systematically track your assumptions, like a knowledge kanban.

Find the full list of design principles at BetterDigital.Services.